For students who are at home, and for adult characters who are not working at any of the places specified in the other forums.
Post Reply
6 posts • Page 1 of 1

Although the name sounds serious, the shop is considered something of a joke to those who know of it. Run by known squib, Sierra Mabora, it is a collection of various items that might also be found in a muggle magic shop, all promising to grant power to the powerless. There are crystals, low quality non-functional wands, candles, various spellbooks and more. A witch or wizard possessing power might find a few potion ingredients for Sierra, being raised in a magical household, knows about them, but visiting her shop is typically a last resort in the instance one of the more reputable shops with a bigger selection is fresh out.

Besides, Sierra, who takes her shop seriously, has a charm that is said to to keep out magical purebloods. It doesn't work at all, but it's best not to let her know that because she's a rather grumpy woman who wouldn't be shy about expressing her hostility openly. As long as she believes those who enter her shop is a fellow squib, she could potentially be sympathetic.
Top

Sierra sighed as she finally saw her newest shipment. For something that came by magical means, it certainly took a while. It's been nearly three hours since she ordered it! How did they expect her to run a business here if they couldn't be reliable? What if a customer was waiting? Thankfully, no one was, but it still annoyed her.

Tearing open the box as she muttered curses about incompetent suppliers, Sierra eyed the product with suspicion as it came into view. As with everything else in her shop, it appeared magical to a muggle, these sparkling crystals. Looking over the slip, she watched as the list was checked off as she read each item.

"Emerald for luck. Diamond for protection. Sapphire for good health. Opal for wealth."

As she went down the list, she did feel a bit better that everything was there, though she still was in a grumpy mood. One might be inclined to point out that she was always that way if not for the fact that she would boot the fool from her shop.
Top

So few people, in Jetta's experience, appreciated a non-traditional way of dealing with things. Whether it had to do with marriage, parenting, or magic, Jetta was an eccentric. So when she'd heard about the Muggle-style metaphysical shop down in Hogsmeade, she absolutely knew she was to go to see what was on offer.

Entering the shop just as an apparent delivery was being made, Jetta slinked around as subtly as possible for a near six and a half foot woman. Glancing at the crystals, herbs, and other fineries, she smiled softly. She definitely appreciated the aesthetics of such things. She definitely anticipated leaving with several things. A thought crossed her mind, and she approached the shop keeper delicately. She'd heard little about the woman except that she could be a bit mercurial.

"Excuse me?" she asked, brushing a bit of black hair from her face. "You wouldn't happen to sell iron nails here? Or graveyard dirt? Mugwort might work just as well though if you have that. And I was told by a family friend to look for something Muggles call Florida water, but given the name, that might be a slight stretch."

She glanced down at the shipment the woman was going over and her eyes widened a bit. 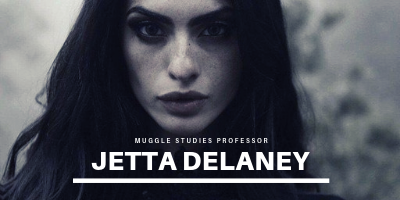 Having a traditional bell on the door, Sierra was made aware of the woman's arrival the moment she entered. She lifted her eyes and smiled, giving the woman a greeting. "Good morning. If there is anything you need, let me know." She then returned to her list. Regardless of her actual mood, she knew that she usually did better business when she had tried to be pleasant. However, despite her words, her voice was a bit strained. She had practice and was good at hiding it, but if the woman focused, she may have picked it up. Sierra was distracted and as much as customers were important, she strongly disliked having to split her attention. She preferred to focus on a single task at a time.

Although Sierra knew nothing about the woman, she was certain that she was a fellow squib. Her charm on the door didn't react at all. It was supposed to glow or make noise or something if a pureblood entered. Even a half blood was supposed to cause some reaction. Alas, like most of the items in the shop, it did not possess any true magic.

As she perused her list, Sierra's thoughts were interrupted again by an "Excuse me" and she involuntarily let out a small huff of frustration, but pulled herself together as she turned to face her customer, smile in place. As she requested a few things, the shopkeeper nodded. "Ah yes, yes, I do. Let me see here." She headed over to the potion ingredients, divided up in several jars with their own scoops. On each jar was a label with the items inside, along with a suggestion of its uses and of course, the price per weight. The graveyard dirt was rather low given its relative ease to procure, a mere few Knuts per gram whereas it cost a fair number of Galleons for a lock of unicorn hair or hippogriff feathers. "How much of each would you like? Looking to do a curse or hex on someone? A former lover, perhaps? Or a former friend?" The requirement of iron nails was a common one for such things. Perhaps she might persuade her to get some black candles or a doll. She could do with the upsell.

She glanced toward the new arrival of gems and nodded. "Depending on your intent, I could recommend a few of those, as well. Each is good for channeling a specific kind of magic. Perhaps they might help."
Top

Jetta could sense frustration in the woman and had the temerity to feel slightly bad for interrupting her. However, that quickly went away as she was shown the ingredients she wanted.

"Former lover of sorts. My daughter's ex. I want him to suffer in very creative ways," she mentioned easily. "And I'm willing to use whatever means necessary to occasionally remind him who he's wronged."

She gathered up what was probably too much of each substance, mostly in order to pay the woman back for interrupting her. She also grabbed the largest bottle of Florida water they had. If nothing else, she'd heard it could be used as floor polish.

"What else would you recommend?" she asked. "I want to make this as untraceable and unpleasant as possible."

She looked down at the stones and smiled at the clear upsell. Still, they were gorgeous, and shiny gifts with meaning always made for the best presents. Perhaps something nice for her daughters and nieces.

"Would you mind telling me about each of them? I'm looking for something nice for my daughters and nieces, but I want to make sure the intent is proper for each one. For example, my daughter Lyssa prefers the color red, but if ruby or garnet reflect something improper for her, I'd hate to get it for her."

If I was going to build a new shop I would do in floor heat. The body shop where I did the body work on my C10 had in floor heat and it was fantastic. No fans blowing dirt around. No noise. The floor was a treat to be near since the temp was set at 70 degrees.