Cressa was raised by her mother, Nora (Claverly) Goldman and step-father, John Goldman, until she got her Hogwarts letter. John was the brother of a Muggleborn and already knew bits about Hogwarts. Both parents are very supportive of Cressa and often keep in touch with her through letters.

As a worrier, Cressa tends to be more on edge and cautious when it comes to anything that could be slightly dangerous she is loyal to a fault, though, and will often go along with her friends so they "won't die alone." When not trying to keep people from trouble, you can find Cressa baking in the kitchen.

Cressa is diagnosed with Dissociative Identity Disorder, or DID, and shares her body with three separate identities: Marix, Abbie, and Genevieve.

The Claverlys, now Goldmans, found their whole lives were shifting. Cressa was failing her classes, getting into fights with boys older than her, and on several occasions had stopped eating for days. Each identity fighting for their turn in control at the risk of the host-body.

Nora was already studying psychology; when the signs of DID became evident in Cressa she changed her focus into learning how best to help her daughter. It was rough going for a long time, but once the family sat down and got to know each individual identity or "alter," things began to get easier.

A system was created where the identities could help each other keep track of what was happening while they were present and a journal of important events and conversations was started, each alter getting their own color to use. It was by no-means perfect but by the time Cressa reached 13, it was a steady way of life.

Marix, 3 years older than Cressa. One of the Twins. Marix is a fighter and often triggers when Cressa or someone close by is in danger. He is a Muggle. His dream is to become an MMA fighter. Marix has taken on the role of protector and soother. His color is purple.

Abbie, same age as Marix. The second of the Twins. Abbie has the most dysmorphia of the alters. She is anorexic. Abbie is a pleaser and a sexual identity. She loves painting, singing, and dancing. Abbie is usually the alter who takes over when physical experiences are too much for Cressa to handle. Her color is green.

Genevieve, perpetually between 3 and 5. Gen is a bit of an age slider, but is never older than five. She is a trauma holder and usually stays quiet. Gen only triggers when Cressa is extremely scared or when she feels very, very safe. Her color is pink. 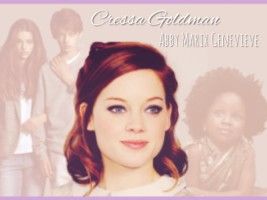