Vesper is the middle child of Roman Delaney, Sr. and Jetta Havich Delaney. He has two older twin sisters named Lyssa and Dahlia, a younger sister named Morrigan, and a younger brother named Roman Jr. His cousin at Hogwarts is Cana Havich, and he has nine other cousins on his mother’s side as well. He lost count of how many cousins he has in his father’s family. He is one of the fourteen grandchildren of Sigurd and Agneta Havich.

Vesper was born in Oslo, Norway, and he has spent most of his life there. Being the middle child has seemingly set him up with an emotional complex, despite his also being the first born son. His parents are loving and encouraging of exploration, but Vesper has allowed himself to be dragged into the shadows of others. Thus, he is just now figuring out his own nature.

He grew up in a relatively good situation. He is loved by his parents and grandparents. His older sisters are good to him, and his younger siblings don’t disrespect him too awfully much. His family has wealth and a fair amount of renown. He’s certainly not bad looking. But something about him leads him to be dragged behind others.

Vesper blames Lyssa, and his cousins Cana and Bjørn for most of it. While he loves them all, and greatly admires Bjørn and Cana, it’s difficult for him to live in the shadows of such large personalities. All three of them have traits stronger than his own, after all. Lyssa is smarter. Bjørn is better with people. Cana is definitely more powerful. What did Vesper have then? So instead of developing his own talents, he often followed around behind the former three, letting himself blend into the background of everything.

This has made Vesper somewhat unpleasant. He has absorbed his sister’s manipulative nature, but none of her compassion. He has mimicked Bjørn’s empty words, without ever gaining meaning behind them. He has picked up Cana’s cruelty, but none of his self-awareness.

Until his mother became a Hogwarts professor, Vesper attended the Gammla Uppsala School of Sei∂r in Gammla Uppsala, Sweden. While there, he mostly shadowed Bjørn and Cana instead of really making a name for himself. Now that he’s at Hogwarts, he is somewhat determined to inject some original personality into himself and get out of the shadows of his sister and cousins.
Last edited by Prof. Jetta Delaney on Sat Sep 08, 2018 11:04 pm, edited 1 time in total.
Reason: I can't count, sorry 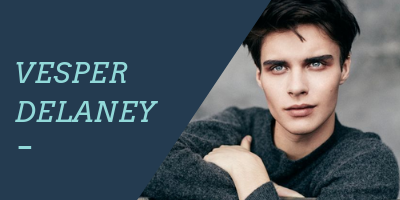